A couple of months ago, the aircraft company Airbus Helicopters Philippines Inc. (AHPI) conducted a local media event at the Ninoy Aquino International Airport (NAIA) to showcase the helicopters they were offering to our armed forces. AHPI said that they already briefed the Technical Working Groups (TWG) of the Department of National Defense (DND) and Armed Forces of the Philippines (AFP) about the aircraft.1

The company presented at least two aircraft, the H130 and the H145M. The H130 is a smaller and lighter aircraft designed more for the light transport role while the H145M is a bigger and heavier aircraft with a clear military role in mind, hence it would seem to be better suited for our armed forces.

’The H145 History’
The H145 product line had a somewhat complicated and sometimes confusing history due to the changes in the company ownership, name and aircraft designation over the years. It first started out as the EC145 which first flew in 1999. Back then its manufacturer was still known as Eurocopter before it changed its name to Airbus Helicopters in 2014 as part of its “rebranding” program.2

The EC145 is perhaps best known for being chosen by the United States (US) Army as its next Light Utility Helicopter (LUH) in 2006 to replace the OH-58 Kiowa Helicopters with an order of over 300 aircraft. The EC145 was designated as the UH-72 Lakota in the US armed forces service.

Then in 2011 Airbus came up with the new, updated version of the aircraft called the EC145 T2 with improvements like more powerful engines, new Aviation Electronics (Avionics), etc. Externally, the main distinguishing feature of this new version was its different tail rotor configuration called the Fenestron which encases the tail rotor in a shroud or cover.3

The EC145/H145 series of aircraft has been adopted by the armed and law enforcement forces of at least a dozen countries around the world with sales of no less than 1,100 aircraft.

But all these additional features don’t come free and entail additional costs. In fact, when the German armed forces bought their H145M in 2013, it cost them USD 16.8 million per aircraft,6 or almost twice what we paid for our AW109E helicopters which was only at around USD 9 million each.7

However, a non-militarized H145 bought by Thailand in 2015 costs them only USD 8.33 million,8 which is closer to the price of the AW109 helicopters that we bought. Upgrading a similar H145 with a Forward Looking Infra-Red (FLIR) sensor and giving it the ability to carry weapons will make the H145 competitive with our AW109s in terms for capability and price.

This is exactly what happened with our AW109 buy; Instead of getting the militarized AW109 Light Utility Helicopter (LUH) which is comparable in terms of combat survivability features to the H145M, we ended up with a commercial AW109E version but upgraded to be armed and to be equipped with a FLIR sensor.

But that isn’t necessarily such a bad thing as against insurgents and terrorists, the AW109E with its night capability has proven itself well in the battlefields of Mindanao. Recently, though, a news item came up revealing that the budget of the light attack helicopter for our armed forces was set at USD 11 million per aircraft,9 and at that budget it seems that the H145M is beyond our reach for the moment.

I could be wrong, of course, but for now, instead of looking at the H145M, I will just instead focus on an armed and sensor equipped version of the H145. Anything more than that would be bonus.

I will be comparing the H145 to the two aircraft that our armed forces are using in similar roles right now, which is the MD-520MG and the AW109E helicopters.

’Characteristics and Performance’10 11 12 13
Below is the data comparison of the main characteristics, performance, payload and approximate range of the three aircraft:

SEATING CAPACITY – With a maximum seating capacity of eleven, it can carry more than twice that of the MD520 (only five) and three more than that of the AW109 (only eight).

DISC LOADING – The Disc Loading of the H145 is significantly higher than that of the MD-520MG and AW109E, 31% and 18% more, respectively, indicating less maneuverability than those two.

ENGINE – The H145 has two engines, same as the AW109E giving it a better safety margin and also higher payload than the single engine MD-520MG.

’Boosted Payload’
The H145’s payload can be made even higher since Airbus is allowing an Alternate Gross Weight (AGW) of 3,800 kg for it, increasing its payload further by around 150 kg, but at the cost of a less safer, temporary restricted flight envelope until that equivalent of amount of fuel is consumed.14

‘Features’ 15 16 17
Features wise, in terms of Avionics, Night Capability, Flight/Fire/Engine Control Systems and Engine Maintenance, there is not much difference between the AW109 and H145. Of course both aircraft have a lot more features than the MD-520MG, which is understandable since it is older by several decades than both. 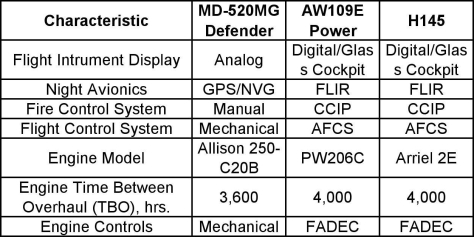 ’HForce’
One interesting feature which Airbus is integrating into a number of its helicopter models including the H145 is an upgradeable weapons suite called the HForce Helicopter Weapons System.18

The basic option is the Option 0 which is just the pylons and use of unguided weapons, but this can be upgraded all the way up to Option 3 which includes two Helmet Mounted Sight and Display (HMSD) units, an Electro Optical System (EOS) and use of guided weapons.19

There is even a planned Option 4 for the system which includes the use of a turret mounted weapon,20 but the weight of the gun and its ammo will cut into the helicopter’s payload weight.

At the very least we may get something like an Option 0 level but with an EOS initially, but good to know that there are additional options ready and available should we decide to go for them sometime in the future. But any such upgrade won’t come cheap, though.

’Doors, Tail Rotor and Canopy’
One main advantage the H145 has over other helicopters is its use of multiple doors for entry and exit. Aside from Side Sliding Doors, it also has a Rear Clamshell Door, and all these doors can be used at the same time allowing for much quicker access by passengers and/or cargo.

The rear Clamshell Door also allows for bulkier cargo to be loaded into the aircraft if necessary. Its Fenestron tail rotor configuration offers a number of advantages, like better safety for Passengers and Ground Personnel since the spinning Tail Rotor Blades are not exposed but contained in a shroud.

It also is quieter and has less vibration resulting in more silent and comfortable rides. However, the Fenestron design is heavier and more complex that conventional Tail Rotors, making the aircraft a bit more expensive than it otherwise would have.21

The H145 also has Better Cockpit Visibility compared to helicopters like the AW109 thanks to its much bigger front canopy which provides a wider view in front and below the aircraft. In theory though this makes the Pilot and Co-Pilot more vulnerable to enemy fire, but our MD-520MG aircraft has a similar cockpit configuration and in the decades of combat operations against insurgents, it doesn’t seem to have been a problem with our Air Force.

’Skids versus Wheels’
One main issue I see with the H145 is its use of Skids instead of Wheels, and it doesn’t look like Airbus is offering a wheeled option for it. Now there are pros and cons between Skids and Wheels,22 23 Skids for one are lighter and thus increase the payload of the Helicopter. They are simpler in that they have no moving parts and thus require less maintenance.

However, they are naturally more difficult to move around on the ground. In order to do so, the Skids need to be jacked up a bit (not easy for an aircraft weighing several thousand kilograms) and small Dolly Wheels are slid in and attached to the skids. Usually two are attached per skid, and only after they are in place can the aircraft be moved around.

For maritime operations, wheeled helicopters are usually preferred because it is easier and faster to reel them into the hangars, especially when there is approaching bad weather. Wheels also provide better traction on ship decks, which is quite important as ships tend roll about along with the ocean waves.

The use of skids will not be an issue for the Air Force since they already operate three other helicopters that use them, the MD-520MG, the UH-1 Huey and the Bell 412EP. It could be an issue with the Navy though since all the aircraft they are or will be operating are wheeled (the AW109 and the upcoming AW159 Wildcat).

’Philippine Presence’
Airbus has a unique advantage over other helicopter manufacturers in that they are the only one with a Maintenance Center in the Philippines that allows them to service both Airframes and Engines.24 Their center is located in Pasay and has been here for 18 years now.

They claim to have a 50% share of the local Civil and Parapublic (i.e., Law Enforcement, Search and Rescue, etc.) market. Having such a presence here potentially means easier access, faster turnaround time and cheaper costs for maintenance.

’Parting Shot’
An armed H145 with EOS would have some distinct advantages of the AW109 in terms of Payload, easier and faster access to its interior because of more doors, a safer and quieter Fenestron tail rotor design, better cockpit visibility and an expected easier, faster and cheaper service/spare parts support system.

However, this would come at a price in terms of lower speed, range and maneuverability compared to the AW109. The use of skids could be an issue with our Navy, but then again the Thais did end up buying H145M helicopters also for their own Navy,25 hence it’s possible our Navy could go with the H145 also.

I don’t know if the purchase of the armed helicopters will be thru bidding or a Government to Government (G2G) transfer, but despite its pros and cons, the H145 I think overall still is a decent choice for our armed forces in case we do end up with it.

8 thoughts on “The H145 for the Philippine Armed Forces?”

This site uses Akismet to reduce spam. Learn how your comment data is processed.

NEW BLOG TO BE POSTED