Revised January 20, 2014. See bottom of the page for the complete revision history

The Philippine Air Force (PAF) is actively looking for a new Close Air Support (CAS) aircraft to replace its aging fleet of OV-10 Bronco Aircraft. Not a lot of details have been released to the public, just that they intend to get half a dozen aircraft (6) and that procurement will be thru Foreign Military Sales (FMS).1 We don’t exactly know which aircraft the PhAF are considering, but right now there are two aircraft of this type that has been competing actively against each other for awhile now, and that is the A-29B Super Tucano and AT-6B Texan II. There are a LOT of materials in the internet comparing these two aircraft, and you can now add this one as my take on the matter.

‘Aircraft Backgrounds’
The EMB314 or A-29 is made by Brazil’s “Embraer” company, it is a turboprop aircraft designed for light attack, Counter Insurgency (COIN), CAS and Aerial Reconnaissance missions in low threat environments, and also for Pilot Training. It is based on the EMB312 Tucano Trainer Aircraft, but is has a longer fuselage, more powerful engine and strengthened airframe. It first flew in 1999, and since then over 170 aircraft has been built and went into service in eleven countries around the world. The A-29B is the two-seat version of the aircraft, and its official nickname is the “Super Tucano”.2

The AT-6B is made by the American company “Beechcraft Corporation“, and it is also a turboprop aircraft designed for the light attack role. Unlike the Super Tucano, the AT-6B has not yet been formally adopted by any air force in the world right now, but it is based on the very successful T-6 Trainer Aircraft of which over 636 has been built and in service in the air forces of 8 countries worldwide.3 The AT-6B prototype first flew in 2009, and is generally marketed as an alternative to the the Super Tucano in the light attack market which the A-29 has been dominating since the turn of the century.

‘Evaluation Notes’
For the “Maneuverability” and “Payload and Range” sections, the following considerations were made:
– Weights with 100% internal fuel was used to try to simulate the aircraft going into combat with full internal fuel after dropping their External Fuel Tanks.
– The weights of the armaments were not included as the RATIOS and DIFFERENCES BETWEEN BOTH AIRCRAFT will remain the same if they will be armed with the same type and same number of armaments.
– Data for each aircraft was derived from various websites at 4 5.

‘Manueverability’
For both aircraft’s maneuvering capability, I am looking at their LIMIT LOAD FACTOR*, WING LOADING* and POWER TO WEIGHT RATIO.* I would’ve wanted to take a look at more aspects like Stall Speed, Maximum Alpha, etc., but those data are hard to come by for both aircraft. Hence, these should suffice for now. Remember that a lower Wing Loading means the aircraft can turn tighter and vice-versa, and a higher Thrust-to-Weight Ratio means the aircraft can go faster going straight up or straight down and vice-versa. 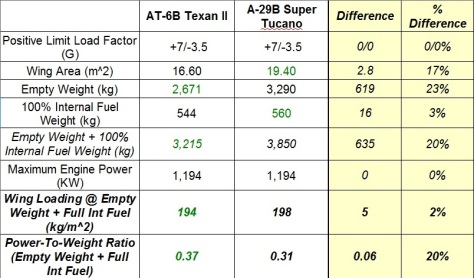 ‘Payload and Range’
For Range, I am using INTERNAL FUEL FRACTION (INTFF) as a rough indicator how far each aircraft can go based on the internal fuel available to them.

+++ With both aircraft at full internal fuel, the Texan II will have better range as the same engine will have to work harder with the Super Tucano because it is heavier. But then the A-29B will have better payload than the AT-6B.

‘Avionics and Weapons’
Although these aircraft are propeller-driven and thus may seem “obsolete” to some, they actually have some of the most advanced Avionics available in the world today, ranging from Heads Up Displays (HUD), Hand On Throttle And Stick (HOTAS) controls, “Glass” cockpits, etc. Here is a list of the Avionics Suite and weapons of both aircraft: 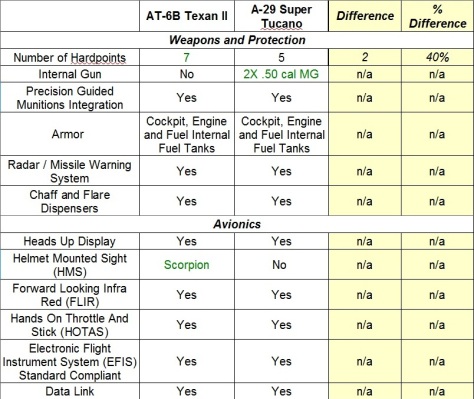 +++ Although the Texan II has more hardpoints than the Super Tucano, the A-29B’s internal guns have less drag than the comparable gun pods that the AT-6B will have to carry.

+++ Although the Scorpion HMCS6 will allow the Texan II to use High Off-Boresight Short Range Air to Air Missiles like the AIM-9X or Python 5, it will be used more for easier and faster acquisition of ground targets for Precision Guided Munitions (i.e., Laser/GPS Guided Bombs/Missiles, etc.). It may even be possible to synchronize and guide the Forward Looking Infra-Red (FLIR) turret using the Scorpion HMCS.

‘Other Factors’
I started this evaluation with a bias for the Super Tucano, after all, it had been dominating the prop-driven light attack market for over a decade now, so I am a bit surprised with the above results. So far it has been relatively even, with one aircraft having advantage in one area, but with the other aircraft having the advantage in another area.

Embraer put up on an entire page on their website dedicated to the apparent advantages of the A-29B versus the AT-6B, complete with pictures, illustrations and videos.7 Beechcraft has been unable to answer point by point Embraer’s assertions above so far, but has come up with a page of their own touting the AT-6B’s advantage over the A-29B. The page is a little bit spotty with some of its data (doesn’t jibe with brochure data), but most do seem to check out.8

‘Lack of Air to Ground Radar’
One thing to note about both of these aircraft is that unlike an aircraft like the FA-50 Fighting Eagle, for example, they lack an air to ground radar, and as a result they are LESS accurate when using CONVENTIONAL bombs, guns or rockets when attacking ground targets. This is because they are unable to determine the EXACT altitude of the target in relation to the aircraft, which is KEY in computing for where the bomb/gun/rocket will hit.

An aircraft with air to ground radar can slew the radar to determine a target’s EXACT distance from the aircraft and a ballistic computer then computes its height relative to the aircraft. On radar-less aircraft like the AT-6B or A-29B, the target’s altitude can only be ESTIMATED and fed into the computer, and therefore a less accurate value of the location of weapons impact can be computed.9

The Super Tucano and Texan II can have Laser Rangefinders integrated into its Electro-Optical System to determine exact target range, but lasers can be affected by smoke or certain atmospheric conditions, hence they are less reliable than radar. Still, the fact that the A-29B and AT-6B have BALLISTIC COMPUTERS will be an improvement over the MANUAL sights being used on our OV-10 Broncos right now.

The Super Tucano’s advantages were enough for it to beat the Texan II in head to head competitions for the United States Air Force Light Attack aircraft contract (not just once, but TWICE10), and also for the Light Air Support contract for Afghanistan last year. 11

It would seem that the Super Tucano is the better aircraft, but the gap between it and the Texan II is not as wide as I once thought it was, or what Embraer would have us believe. Politically, because of its success with the USAF and Afghan Air Forces against the AT-6B, and the fact it is in service with a lot countries already, the A-29B would be the “safer” bet as it has that prestige of being a “winner” and a service-proven platform.

But I feel that even if the PAF does end up with the Texan II, it won’t really be such a bad thing as after all, it does enjoy some advantages over the Super Tucano also. In terms of price, the AT-6B is about 50% cheaper at its estimated price of USD 14 million per plane based on an unfulfilled order (for some unknown reason/s) in 2008 by the Iraqi Air Force,12 compared to the Afghan Air Force order for the A-29B which cost USD 21 million per plane. In the end, either aircraft would be a good choice for the PAF to replace the OV-10 Bronco.

Revision History:
* January 17, 2014: Originally posted
* January 20, 2014: Major re-write of blog, changed data and conclusions. I made some wrong assumptions and calculation errors, coupled with misleading and/or lack of data from both Embraer and Beechcraft made for some wrong conclusions. I apologize to the readers if I caused some confusion.

This site uses Akismet to reduce spam. Learn how your comment data is processed.

NEW BLOG TO BE POSTED